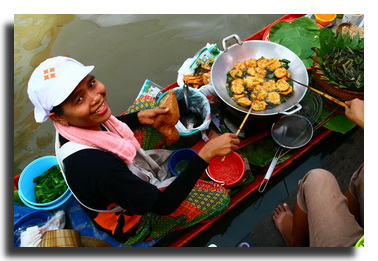 Thailand (previously Siam) with a population of 67 million people has ever been a multi-ethnic and multi-confessional society. One third of the population are living in the center of Thailand, Bangkok included. One third is living in the northeast at Lao and Khmer (20% in the north and 15% in the south) and ethnic Malay Muslim are the majority in the 3 southern provinces of Thailand.

This country is often called as "land of smiles" and it is true: there is no other country in the world where you can see more people smiling. Thai people are friendly and tolerant, but it is important to know what to do or not to do.

Though in many Thai areas there is a strong sense of regional identity and pride, more than 85% of the population speak a variant of Thai language. Central Thai language is being taught at schools and spoken by the government. Lao and "Isaan dialect" is often spoken in the northeast; "Guam Muang" or the northern dialect is spoken in the north and a southern Thai dialect in the mid-south. Many further Thai dialects are spoken among smaller groups like Shan (Tai Yai), Lue and Phutai.

During the long history of Thailand many immigrants have entered the country. Many of them were skilled as writers, painters, dancers, musicians and architects. These immigrants enriched the culture of Thailand.

Up to 12% of Thai are of Chinese heritage. In the beginning of the 19th and 20th century Chinese immigrants arrived and settled down here. They married Thai women, used Thai names and learned their language. Like elsewhere in the region these Chinese immigrants proved their sense for business and control a big part of Thai business, today.

Other Thai groups are the Khmer in the border provinces with Cambodia, the Mon, who assimilated with the Thai and the Vietnamese. Smaller tribes like the Hmong, Mein and the Karen are living in the mountains. Their population is 788.024 people.

The population is mostly rural, concentrated in the areas of the country where rice is 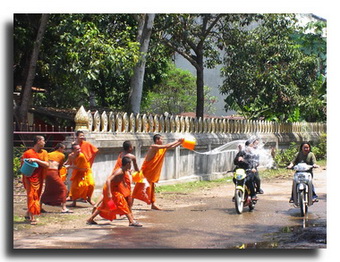 growing. These regions are located in the center, northeast and in the north of Thailand. Because of the industrialisation Thai urban population in the area of Bangkok is growing.

Throughout its history, Thailand has been characterized by its tolerance for alien religions and beliefs. Thanks to the total religious freedom all major religions can be found in practice. There are four main religions, Buddhism, Muslim, Christianity, and Hinduism, in Thailand. The majority of Thai people practice Hinayana Buddhism or Theravada Buddhism and they form about 94% of the total population of Thailand. The Islam is the second large religion in Thailand with 4% represented mostly in the southern region.